Jen over at IHeartOrganizing has issued a challenge for January! Clean out your paper clutter!
Where does your paper monster live? Mine is in the home office. It started out admirably enough. “Oh my goodness! This house is a mess! I have GOT to get the ____ [insert messy room name] cleaned up or I’m moving!” But then lazy happened. “I have this huge pile of stuff I need to file/put away and it all goes in the office… maybe instead of spending 30 seconds doing that right now, it would be a BETTER idea for me to take the stack and set it on some random flat surface in the correct room! That way I can promise myself I’ll get to it later and never do it!”
So that’s what I did. Once… twice… thrice (???)… A MILLION GAZILLION TIMES! So now the office looks like this:

(This is a slightly cleaned up version… I actually started picking at the office in December so this isn’t the lowest of lows).
This is actually great timing for a project like this one! My dear husband and I have been talking about re-doing the office. It was a great place for two gamers to hang out when we first moved in. When we found out we were having the little man we had to do start office renovation part one.
I originally had an L shaped desk floating in the middle of the room with both of our computers on it. It actually looked pretty cool, but there were cords EVERYWHERE and somewhere in my “OMG LEARN ABOUT BABY” books it said that infants shouldn’t play with electrical cords. So that’s how our computers got where they are now.
We took the L-Shaped desk and took out the middle joint section leaving us with 2 regular desks. We threw them up against the wall, and put our filing cabinets in between to hold the printer. Why do we have two filing cabinets? Well, I had one in my apartment, and my lover had one in his apartment… so when we moved together we had two! Can you tell I’m an accountant? Look at that math! We bought a futon to put along the other wall and put a bookshelf in the corner. It was actually realy cute looking… if not entirely functional.
Fastforward almost a year (my little man will be one in 21 days… but who’s counting?) and we’ve re-arranged again. First of all, Dave Ramsey told us we should sell stuff to have an emergency fund. Goodbye futon and bookshelf! Hello baby step #1!
So then we had an estate sale for my grandmother and I picked up these two lovely chairs! 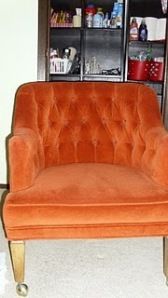 Doesn’t that beautiful orange just scream 1973?! So those will be my first re-upholster project… wish me luck! We also inherited a nice big dining room table which makes me sooo happy!
Our smaller round table has made it’s way to the office. We trashed our big ugly falling apart office chairs and are now using our small ugly “retro” chairs at the desks AND at the table when needed. It’s really not half bad! Except… do you remember that picture up at the beginning?
Here it is again:

Oh yea! There’s no room for anything! So anyway, here is my plan for the room: 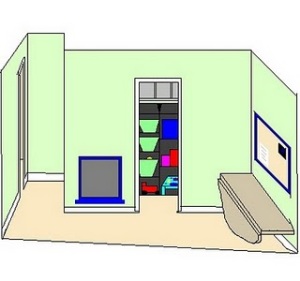 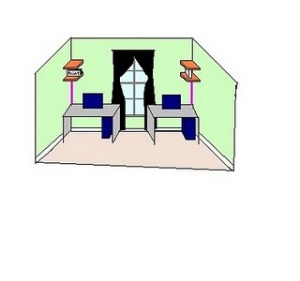 For those of you who can’t appreciate my insane paint skills, I plan to push the computer desks up to surround the window on the front wall. The round table will be folded down to take up less room on the wall where the desks are now. The computer accessories (silhouette, printer, router, NPC scanner, etc) will be on floating shelves in the corners above the desks. I plan on making a fun chalkboard area for the little man also. The filing cabinets are GONE! I figure the few paper things we need to keep can be put in a small portable file (thank you Jen for the idea) in the closet, and we can get rid of the cabinets completely! So I’m going to sell those on Craig’s List, and use the proceeds to get the portable solution for the closet!
And now for the great segue you’ve all been waiting for…
If I’m going to get my room to go from this: 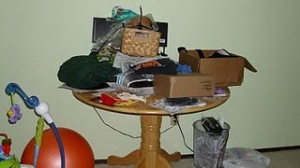 I’ve got to get my paper clutter in order (and for the most part shredded and gone).

Stay tuned for updates as this transformation takes place!

Hi! I'm Kristi! I'm a mom, a wife, a daughter, a friend. I'm a newbie to sewing and blogging, but I'm excited to get started! Sewing is the first hobby I've really had in a long time. In high school, I sang, I played the piano, I played in the band, I wrote in journals. I went off to college, got married, started a family, and lived a life without hobbies. How boring?! Then I started reading blogs. One thing led to another and soon I was at my co-worker's house borrowing her sewing machine! I haven't looked back since! Sewing is a release for me. It's so much fun to create beautiful and useful things. It's fun to be learning something new, and it's fun to share it with you! So welcome! Take a look around, and let me know you're here! I love to meet people and respond to every message I get! And I can't wait to meet you!
View all posts by anestinthemaking »

Posted on January 12, 2011, in challenge, office, organize. Bookmark the permalink. Leave a comment.

Leave Me Some Love! Cancel reply